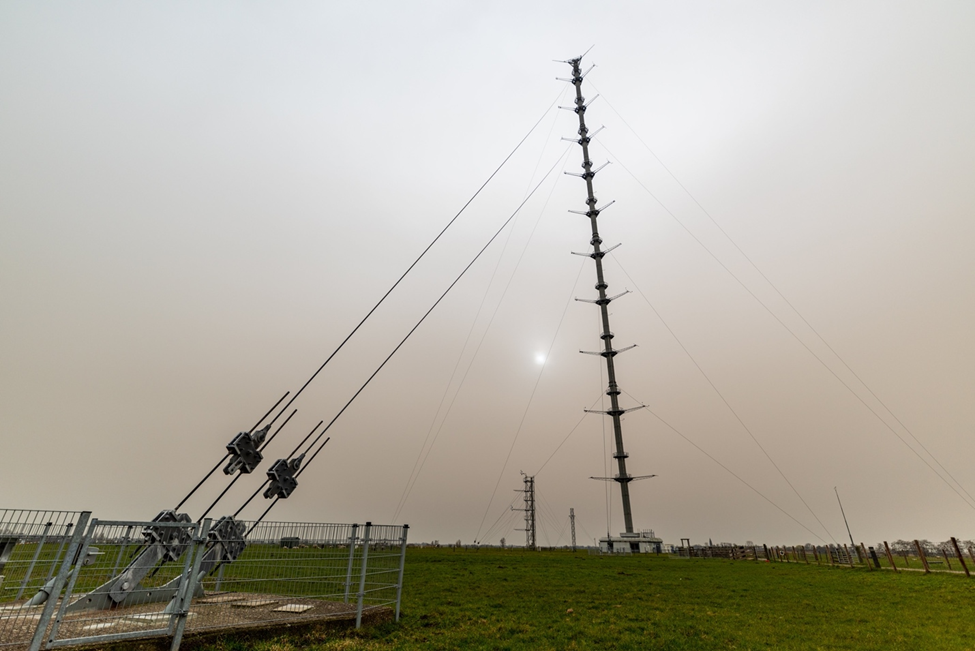 Information in Dutch can be found here.

The Netherlands had its sunniest March on record with on average 250 hours of sunshine, marked by high pressure and clear skies present over Western Europe for much of the month. However, the weather on Wednesday, March 16 was significantly influenced by the cloud of Saharan dust that was carried over Europe and arrived over the Netherlands that day. At the end of the morning the blue sky disappeared and the sun remained virtually invisible for the rest of the day as can be seen in the photo. At first glance, this seemed to be low clouds, but it was in fact a thick layer of dust that drifted over at a height of about two kilometers. Remote sensing instruments in the Ruisdael Observatory offer great capabilities to observe plumes like these. Equipment at the Cabauw research station and at operational stations in KNMI’s nationwide surface observing network were able to record details of the dust layer. In-situ observations on the ground from the Air Quality Monitoring network and the research instrumentation in Cabauw did not detect high levels of particulate matter.

The influence of dust on the weather is interesting to investigate. Although the presence of the dust was correctly forecasted in models from the Copernicus Atmospheric Monitoring Service (CAMS), the radiation effects were insufficiently taken into account by meteorological forecasting models (HARMONIE). The dust layer of March 16, 2022 blocked so much light that the sun was no longer visible. Scientists call this ‘optically thick’. This has a major effect on the temperature, which was not properly included in the forecasts, because the effects of dust are currently insufficiently calculated. With small amounts of dust, the effect is limited, but a large amount, such as with this event, has a strong influence. Due to the near-complete blocking of the sun, the optical thickness of the dust plume could not be measured by the radiation instruments.

The Sahara dust also has an effect on cloud formation. For example, at the end of the afternoon and early evening it could be seen in Cabauw’s data that light precipitation formed where the dust was in direct contact with clouds. This data will enable researchers to better understand how the properties of the Saharan dust change during transport. The longer the dust is in the air, the composition changes because the larger grains of sand disappear first, and later due to chemical changes.

The Sentinel-5p/TROPOMI observations of the UV Aerosol Absorbing Index (UVAI) show the presence of the dust cloud. On 16 March however, it is currently not fully understood how the UVAI values correspond to the ground based observations. This needs further investigation.

The measurements taken on the Saharan dust are the same that allow us to infer the properties of volcanic ash. Thus, this episode provides data to do research on that subject.